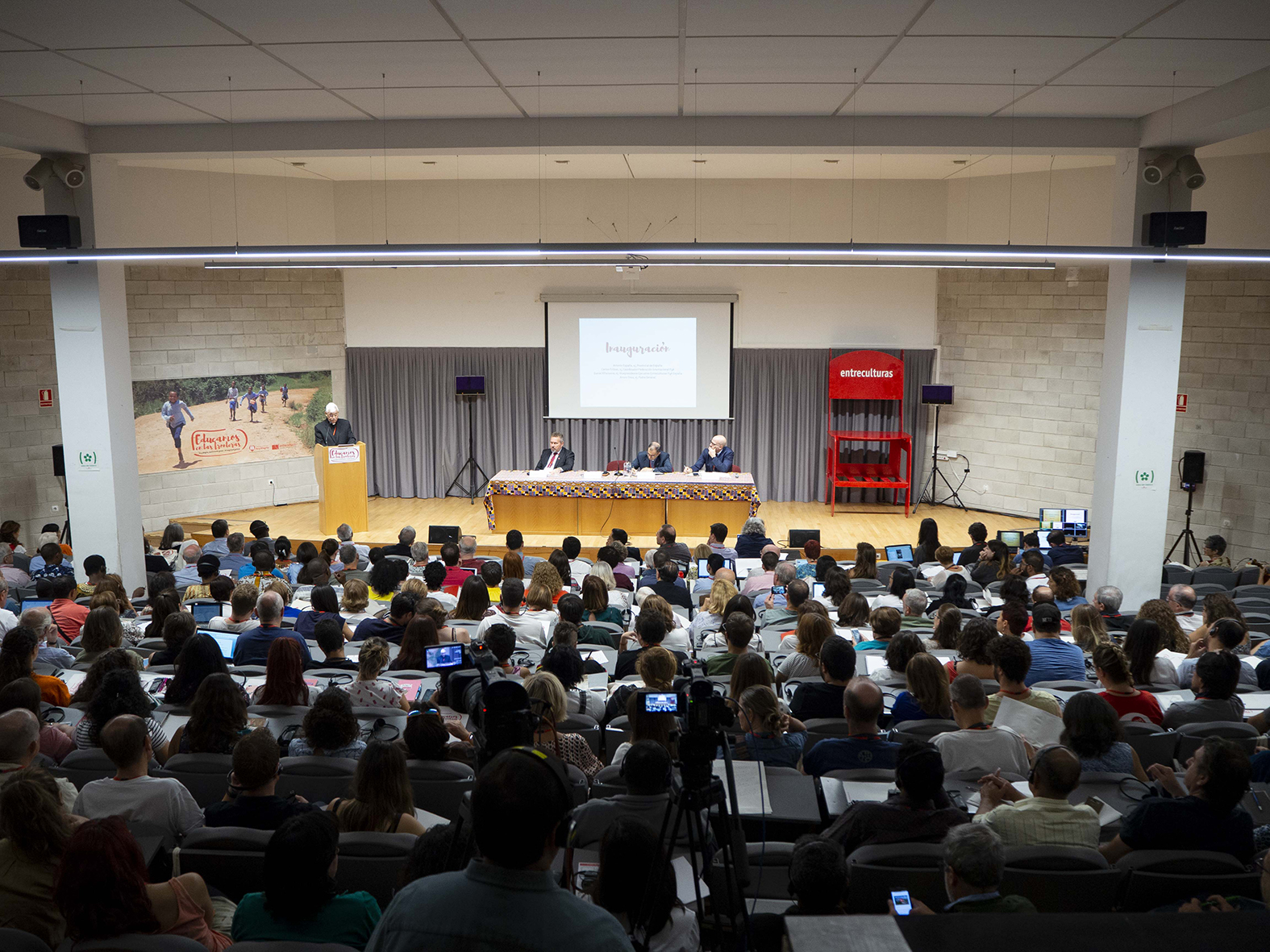 After a welcome video in the 15 languages that are currently spoken in Fe y Alegría, evidence of the diversity of our movement, the floor was then given to Dani Villanueva, SJ, Executive Vice President of Entreculturas, who began by thanking the participants at his table –Carlos Fritzen SJ, Coordinator of the International Federation of Fe y Alegría; Antonio España SJ, Provincial Superior of Spain; and Arturo Sosa SJ, Superior General of the Society of Jesus, Spain– for their attendance.

Dani Villanueva touched on the fact that this is the 47th International Fe y Alegría Congress and the 18th National Entreculturas-Fe y Alegría Spain Meeting, an event that welcomes 350 participants from 33 different countries and he thanks during a video presentation of each of Fe y Alegría’s 22 countries, their presence.

As he has done at other events, Dani Villanueva thanked the volunteers from the 28 Entreculturas delegations throughout Spain, and gave an special mention to Agustín Alonso SJ, who was the Director of Entreculturas for 14 years and Jorge Cela SJ and Jesus Orbegozo SJ because of their historic relationship with Fe y Alegría.

Fe y Alegría is nothing without partners and a shared mission, a cornerstone that Dani Villanueva drew from to thank the amazing people and organisation he has worked with along the way, including with the Jesuit Refugee Service and Jose Ignacio García SJ, Director of JRS Europe, as well as Tom Smolich SJ, Director of the International Office, the Jesuit Migrant Service of Spain, Jesuit School Network of North America, Educsi, the Spanish Social Sector, Radio ECCA, Educate Magis, Pórticus, Accenture and Olé Communication.

Dani Villanueva also spoke about the Congress that Entreculturas-Fe y Alegría Spain hosted in 2004, pointing out the peculiarities of Fe y Alegría Spain that took shape in Entreculturas in 2000, and which has since turned into a somewhat different Fe y Alegría; although there are no Fe y Alegría schools in Spain, the organisation works with almost 900 educational centres that support faculty and non-teaching staff in their work towards building a global citizenship and he has highlighted the importance of the yough.

Dani Villanueva finished his remarks by saying that we desire and need this Congress to be a time of inspiration and creativity, as many of the projects that will emerge in the coming years will have their start in the conversations and work that take place here this weekend

Antonio España SJ, Provincial Superior of Spain, took the stage and welcomed the Spanish Jesuit Province, which is closely tied to the evolution and growth of Fe y Alegría.

The Provincial Superior underscored that Fe y Alegría has been part of the Society’s mission in Spain for many years, on a more institutional basis since 1985, and mentioned the founders of Fe y Alegría Spain as well as each and every one of the directors: “The significance of this moment deserves a reminder of these beginnings, and I would like to mention the immense work of the Fe y  Alegría founders in Spain, Father Cesáreo García del Cerro and Faustino Martínez, together with the extraordinary drive of Luis Gimenez Lombar. Years later, after the turn of the century, the organisation would be transformed into what we now know as Entreculturas – Fe y Alegria Spain, launched by Alejo Bilbao, and developed in its current form by the leadership of Agustín Alonso for no less than 14 years and of our much-loved Dani Villanueva since then”.

The Provincial Superior also emphasised that the work of Cooperación Alboan and Entreculturas places Fe y Alegría as a clear missionary priority. He thanked Fe y Alegría for all that it has shared with the Spanish Jesuit Province and for how it has transformed his perspective as a result of several different exchanges, serving as an inspiration for his proposal of global citizenship and his concept of public advocacy. He underscored that all of the Province’s solidarity structures are truly filled with a Southern sense of determination and focus, motivated specifically by the creative and innovative evolution of Fe y Alegría in Spain.

The Provincial Superior closed his speech by reaffirming the commitment that the Society of Jesus in Spain has to continue supporting and promoting work for quality education on the frontiers, with an emphasis on the most vulnerable people.

Dani Villanueva turned the floor over to Carlos Fritzen SJ, Fe y Alegría International Federation Coordinator, who began by thanking the hosting organization, Entreculturas and dedicating his first words to Spain and its strategic position. “Here you have one eye towards Latin America and the Caribbean and another towards Africa and Asia. You can get a more global and diverse vision of Fe y Alegría here, a Fe y Alegría between cultures that enrich us, shape us, and challenge us to educate more at the frontiers”.

Carlos Fritzen also had a few words for the young people who led the first day of the Congress and the work that Fe y Alegría does with youth, encouraging participants to use this Congress as a chance to dream that another world is possible, one that is already in the heads and hearts of the youth with whom Fe y Alegría works.

Carlos Fritzen followed by speaking about the crucial moment between the first and second half of the Federal Priorities Plan and the work plan for the second half of the period, which seeks to specify actions that provide contextualised responses to the four federal priorities deployed in seventeen joint work initiatives.

He also underscored that the way forward is as important as achieving the objectives set. One of the great innovations that he visualises is a demonstration of our true capacity to work in networks and with leadership styles that are more inspiring of processes than executors of tasks.

The Federation Coordinator concluded with moving words for the Superior General. “The General Congregation 36 marked the need to discern the universal apostolic preferences of the Society and that these take the form of planned actions, to which you, Arturo, are committed to defining and putting into practice. From this frontier as a global movement, at Fe y Alegría we feel called to give everything we have to these joint missionary works. We put everything in your hands, Superior General. Not you, nor the Society, nor we, go alone on this mission. We go with Jesus to the front. You can count on our work, our faith, and our joy”.

The floor was then given to the speech by the Superior General who gave an inspiring and motivating speech in which he delved into the ways of confronting challenges Fe y Alegría is facing as a global network. He urged all participants to dream about an action capable of having an impact at global level without losing a bit of the radical choice for the care of the vulnerable and excluded.

Find below the link to Superiors General’s speech, we are glad to share it with you.

As the opening ceremony came to a close, Carlos Fritzen gave the Father General a stole as a token of his gratitude for his presence at the Congress.